Want to level up your Angular skills? Who doesn't. Here's what you need to know

Todd is the Founder of Ultimate Courses. With a passion for Angular, TypeScript and JavaScript, Todd leads the online courses creation and has written hundreds of articles ... (more)

In this series of four Angular (v2+) posts, we’ll explore how to bootstrap an Angular app, create a component, pass data into a component and pass new data out of a component using events.

Angular quickstart guide is a great place to get started with the next version of Angular, however there are some crucial aspects of the tutorial that can be elaborated on those new to Angular.

Let’s walk through the bare essentials in a sensible order to get started and actually teach you what’s happening with all the boilerplate setup we get, as well as how to create your first Angular component and bootstrap your app.

A quick brief on the tooling options available when setting up your first Angular project.

Webpack has become the defacto standard when building Angular applications, you can check an introduction to Webpack post here on the Angular documentation.

System was heavily used in the beginning whilst Angular was being built and during the release candidate stages before official release, however the team have switched to advocating Webpack instead due to it being much more powerful.

The Angular CLI was built to help scaffold new projects, create components and help with deployment. Underneath it utilises Webpack for you, it’s a great starting place for beginners to alleviate new tooling associated around Angular.

Each root component lives within a module, and these are defined using @NgModule. Here’s the typical @NgModule for an Angular application, which will need to import our root component:

You can read more on NgModule here. Here’s a quick explanation on the three @NgModule properties used above:

Now we’ve got a root component and root module, we need to learn how to bootstrap that particular module.

You may have noticed above that when using @NgModule we use the export keyword on the module AppModule. This allows us to import it elsewhere and tell Angular to bootstrap that particular module.

Typically you’d bootstrap an Angular app by importing that module into a new file:

You can also see we’ve got platformBrowserDynamic as the sole import from this module, this is actually a bootstrapping function that allows us to instantiate our app.

The next step is telling the above imported method what module you’d like to bootstrap. In our case, we’ve created AppModule, which registers AppComponent. We also have AppModule imported in the file above, which we can simply pass into a bootstrapModule method:

And that’s it! These are the key concepts of bootstrapping an Angular application.

Everything we’ve done here is readily available in a Plunker for you to have a look through, when using something like Plunker, you’ll have to use System.js as we cannot use Webpack (as it’s an offline development tool):

Now we’ve learned how the basic bootstrapping process works, let’s move on and learn how to create an Angular component.

Let’s take a dive into Angular’s NgClass and master the syntax, whilst a... 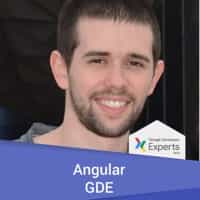